Central banks in developing nations will take center stage this week as assurances that the Federal Reserve is in no hurry to raise interest rates lay the groundwork for an extended rally in emerging-market currencies.

Policy makers in Poland, Russia, Peru and Malaysia are all due to set borrowing costs, safe in the view that U.S. rates will remain low for longer, a that Fed Chair Jerome Powell hammered home at Jackson Hole. And it means that any hawkish turn in emerging markets could bring the carry trade back into play, supercharging gains, as was the case for the last week.

While the emerging-market carry trade returned just 0.5% in the first half, Bloomberg’s EM Carry Index is already up almost 2% since the end of July, with high-yielding but volatile currencies such as Turkey’s lira and South Africa’s rand leading the charge. The MSCI emerging-market currency index posted gains in nine out of the last 11 sessions.

“Emerging-market currencies may be in a sweet spot,” said Christopher Shiells, an analyst at Informa Global Markets in London, who backs Brazil’s real, Russia’s ruble and the Mexican peso to outperform in the coming months.

Friday’s weak U.S. underscored belief that the Fed will hold rates even as it begins to scale back emergency stimulus. That would keep the cost of borrowing dollars to park in higher-returning securities low, a strategy that could serve investors particularly well given that the Fed’s focus on nurturing the economic recovery will also keep a lid on the greenback.

“Powell, at least at this juncture, seems to have managed a pro-EM taper  -- something we never thought we would see,” said James Barrineau, head of emerging-market debt at Schroder Investment. “The key thing Powell did was to forcefully separate the taper discussion from the rate hike discussion. He indicated rate hikes are probably a long way away. That has resulted in a weaker dollar which is a strong positive for EM.”

The decoupling of tapering from rates has also given a new lease of life to the currencies of early hikers like Brazil and Russia, whose outperformance had been starting to wane following aggressive gains this year. The ruble and real have been among the top performers in emerging markets since Powell’s Jackson Hole speech on Aug. 27, which gave policy makers room to react to economic fundamentals rather than second-guessing the Fed.

“EM central banks have already reacted to higher inflation and raised interest rates, creating a buffer should economic growth start to surprise on the downside next year,” said Anders Faergemann, a money manager at PineBridge Investments in London, who described Powell’s Jackson Hole speech as a “game changer.” With inflation in many developing nations close to peaking, “these countries have positive real rates already which would tend to support the exchange rates,” he said.

That may be just the start. The ruble’s volatility-adjusted implied yield, for example, has climbed more than 200 basis points to a 20-month high following a rate increase in July, with another expected this week. And while implied yields fell across emerging-market regions in the past month, they’re already showing some recovery in Asia and Latin America.

As the carry trade roars back, investors may find yields in countries such as South Africa, Brazil and Turkey too juicy to resist, bolstering their currencies, said Michel Vernier, head of fixed-income strategy at Barclays Private Bank. Export- and commodities-linked currencies are also expected to get a boost.

These are the events to look out for this week: 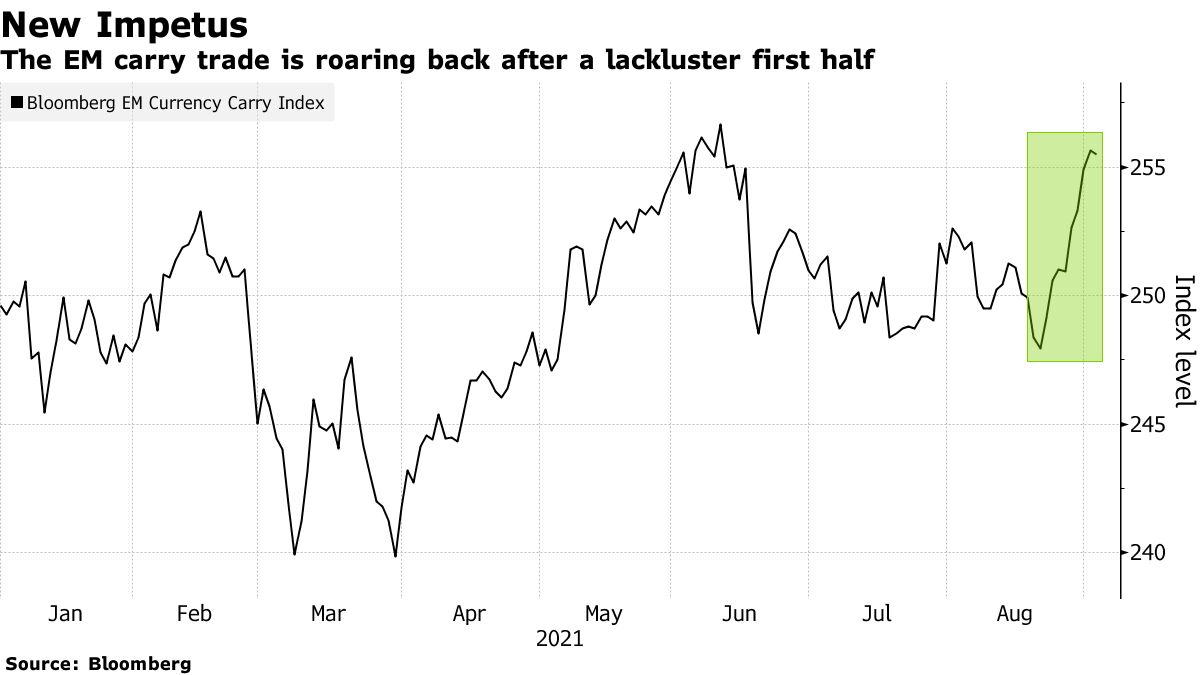 Next wave of rate meetings may separate winners from laggards