Ether briefly rose above $4,000 late Friday amid a monthlong surge around a major upgrade, and as demand for non-fungible tokens continues to widen.

The second-biggest cryptocurrency rose as high as $4,027 on Friday before paring gains. It was at $3,914 as of 12:06 p.m. on Saturday in Hong Kong, trading at levels only reached previously in May. Ether has gained more than 50% since the end of July, with the Ethereum network’s London upgrade early last month reducing supply increases.

“Since the EIP-1559 upgrade one month ago, over 180,000 $ETH (equal to over $700 million at current market prices) have been burned, resulting in continued disinflationary pressure on the Ethereum supply,” the Fundstrat crypto team wrote in a note Friday.

Ether has also done well amid continued interest in decentralized finance or DeFi, and NFTs -- much of which use the Ethereum network. NFTs in particular have surged, with sales on major marketplace OpenSea 10-fold in August from the prior month.

Numerous cryptocurrencies have been performing well. -- now the seventh-biggest cryptocurrency -- is up 68% in the past seven days and Polkadot has risen 27%, according to Coingecko.com. The overall crypto market cap is $2.36 trillion, after bottoming at $1.24 trillion on July 20, CoinGecko data show.

“The breakout in Ethereum continued overnight, to levels last seen in May of this year, and cascaded into , Ripple and Polkadot,” said Martha Reyes-Hulme, head of research at digital asset prime brokerage and exchange Bequant, in a note Friday.

Bitcoin hasn’t seen the gains of its smaller peers, though it counted a success of its own recently by breaking through $50,000 again on Thursday. It’s been holding near the level since, after spending more than a week sitting just under the key round-number level. 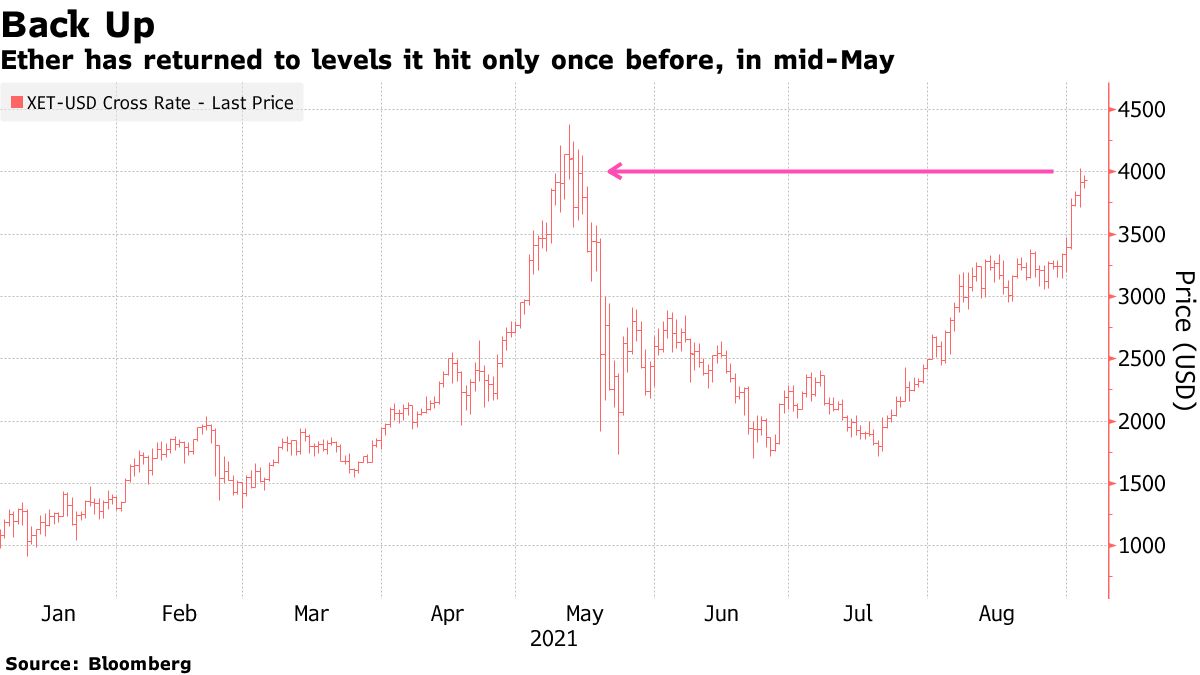 Solana, now seventh-biggest crypto, is up 68% in seven days

Bitcoin is sitting close to its key round-number $50,000 level