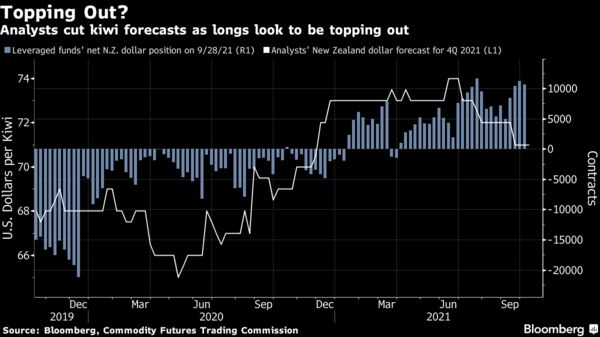 New Zealand’s central bank for the first time in seven years this week but doubts are growing over the pace of further tightening. That looks to be bad news for the kiwi but good for local bonds.

The currency has already gone into reverse, dropping more than 3% from last month’s high, while an index of quarterly analyst forecasts for year-end has declined to 71 U.S. cents from 74 cents in June. Hawkish predictions for further tightening are being dialed back by Covid lockdowns that are sapping business confidence and weighing on economic growth.

“We struggle to see other than large levels of government expenditure, where the next catalyst for New Zealand growth is going to come from,” said Fergus McDonald, head of bonds and currency at Nikko Asset Management New Zealand in Auckland. “Quite often in previous tightening cycles some other event pops up that means the top of the tightening cycle, which was initially anticipated, never actually eventuates.”

Policy makers led by Governor Adrian Orr increased the official cash rate by a quarter percentage point to 0.5% Wednesday but said the latest Covid restrictions had badly affected some businesses in Auckland, and there will be longer-term implications for economic activity from the pandemic.

New Zealand’s dollar briefly popped higher immediately after the decision before ending the day down 0.7% as the lack of further guidance about tightening damped sentiment. The kiwi was trading at 69.20 cents late on Thursday, down from as high as 74.65 cents in February, with selling also fueled by rising Treasury yields and a stronger U.S. dollar.

Overnight indexed swaps show an 88% chance that the central bank will raise its benchmark by another 25 basis points at its November meeting, and are fully pricing in another move on top of that by April. The hawkish positioning leaves plenty of room for disappointment.

“We are penciling a rate hold in November on the basis that the RBNZ has ‘lifted off’ from its record-low and would now prefer to keep its options open, with any further tightening likely to occur in a small and steady approach,” said Lee Sue Ann, a macro strategist at United Overseas Bank Ltd. in Singapore. “The RBNZ’s projections for rapid rate hikes through 2022 are overly optimistic.”

Positioning in the kiwi is also bullish -- indicating further potential downside if sentiment starts to shift. Leveraged funds held a net 10,702 contracts betting on gains in the New Zealand dollar-U.S. dollar currency pair as of Sept. 28, close to a three-year high set in July, according to data from the Commodity Futures Trading Commission.

Nikko Asset Management says the kiwi may struggle in an environment where offshore economies have a higher growth level than New Zealand, but for the same reason it is growing positive toward the country’s sovereign bonds.

“We’re starting to see value in the longer-end of the New Zealand bond market,” McDonald said. If the company is right about RBNZ struggling to raise its benchmark rate to 2%, then 10-year bond yields of “up and over 2% start to represent quite good value,” he said.

Analysts have been cutting their year-end forecasts for kiwi

A More Volatile Environment for Pound Emerges on BOE Aftermath