The dollar surged past a key level against the yen for the first time since 2017, as the renomination of Jerome Powell as Federal Reserve chair fueled bets that the U.S. might tighten policy more quickly.

The dollar-yen climbed as much as 0.2% to 115.14 on Tuesday -- a Japanese market holiday -- surpassing the psychologically important 115 level. Treasury yields jumped overnight, widening the gap with equivalent Japanese government bonds across the curve and boosting the relative appeal of U.S. assets.

“We still think dollar-yen has further to run and forecast it will hit 120.50 by December 2022,” said Commonwealth Bank of Australia strategist Kim Mundy. “U.S.-Japan interest rate differentials will also increasingly support the pair as the Fed starts its tightening cycle next year.”

The greenback has jumped against all of Group-of-10 peers this month amid bets the U.S. will speed up normalizing monetary policy as the economy recovers from the pandemic and inflation picks up. Traders have priced a full quarter-point rate hike into the June Fed meeting and now see a good chance of a second by September and a third by December.

That has put the yen under particular pressure with the Bank of Japan maintaining an ultra-loose monetary policy to stimulate sluggish economic growth. The currency has weakened more than 10% this year, the worst in the G-10.

“Our longstanding view has been policy divergence and the Bank of Japan has been seen at the back of the horse race,” said Paul Mackel, global head of foreign-exchange research at HSBC Holdings Plc, on Bloomberg TV. “If the dollar continues to strengthen into the FOMC, then USD/JPY is also facing that stronger pressure to run.” 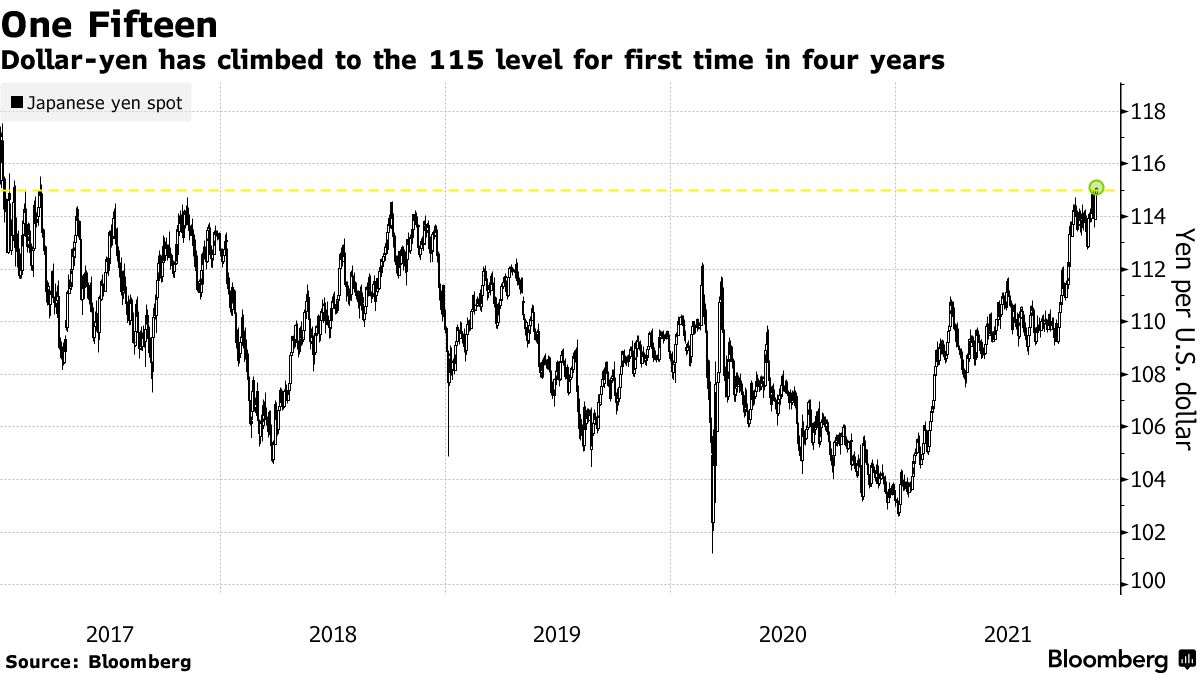