Hungary’s forint tumbled to a record low against the euro, piling pressure on the central bank to deliver a third interest rate increase within two weeks in response to a rapidly deteriorating pandemic and a broader selloff in central and eastern European currencies.

The currency slumped as much as 0.8% to 370.22 per euro on Monday, breaking past the previous record reached last year when Covid-19 virus first engulfed the eastern European Union member state.

Hungary’s central bank boosted the one-week deposit rate by 70 basis points to 2.5% on Nov. 18 to shore up the forint, just two days after a smaller increase in the benchmark rate. But like in central European peers Czech Republic and Poland -- which delivered even bigger rate hikes this month -- the monetary tightening steps weren’t enough to overcome investor concerns about still deeply negative real interest rates.

“The euro-forint rate is a clear sign that markets expect another hike on Thursday,” Raiffeisen Bank analysts Levente Blaho and Gergely Palffy wrote in a research note on Monday.

Last week’s increase in the rate offered on the one-week deposit -- where commercial lenders park most of their money at the central bank -- made the facility the effective benchmark, giving policy makers a powerful tool to react to market swings on a weekly basis as opposed to the base rate that’s set monthly. Rate-setters said they would use the weekly facility “actively” to mitigate currency swings.

While the central bank has no exchange-rate target, the forint’s level complicates policy makers’ job of achieving price stability as the weak currency feeds into inflation. Consumer prices increased by 6.5% in October, the fastest pace since 2012 and well above the central bank’s 3% target. Policy makers forecast that the inflation rate will rise above 7% in November.

Central bankers in Hungary were initially reluctant to deliver an out-sized interest-rate hike, saying they were balancing risks to economic growth from a resurgent coronavirus with the need to protect the currency.

Hungary reported record new infections on Nov. 19 despite having a majority of its population vaccinated, raising concern about the economic fallout. Gross domestic product grew an annual 6.1% in the third quarter, missing estimates and slowing sharply from a record pace in the previous three months.

Prime Minister Viktor Orban, trailing in most polls ahead of general elections next year, has kept Covid restrictions at a minimum. New ones, mandating masks in indoor public spaces, only took effect on Saturday. The country registered 27,209 new Covid-19 cases from Friday to Sunday, suggesting that the pace of infections continued to accelerate over the weekend.

In addition to the rate hikes last week, the central bank also stepped up the pace of tapering of its quantitative-easing program and ended the provision of forint liquidity via swaps. It also removed the ceiling for providing foreign-currency liquidity, all steps aimed at stemming the forint’s slide. 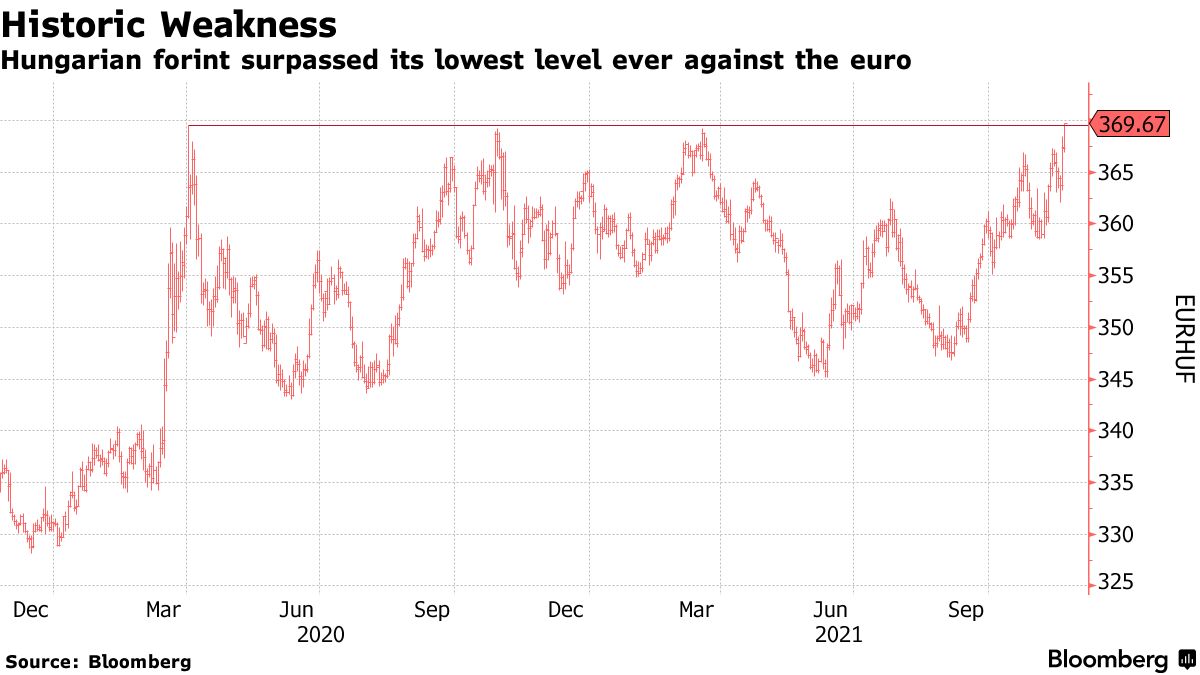