Chile’s peso and stocks surged after the right wing topped the voting in the first round of the presidential election and won control over half of the Senate, squashing the chances of the left overhauling the country’s free-market economic model.

The peso rallied as much as 3.5%, its biggest intraday gain since November 2019, before paring the advance to 1.9% at the close of trading. The benchmark S&P IPSA stock index leaped 9.7%, the best performing major index in the world Monday and its biggest gain since October 2008.

Conservative Jose Antonio Kast won 27.9% of the votes on Sunday, followed by leftist Gabriel Boric with 25.8%, according to data from electoral body . While that was largely in line with the latest opinion polls, it was Kast’s camp that was celebrating last night, with former front-runner Boric trying to rally his supporters and reaching out to the center ground. An opinion poll taken just before yesterday’s vote showed the second round as too tight to call.

“The only thing that’s clear from yesterday’s results is that Chile rejected an aggressive change to the left,” Daniel Rico, a currency strategist at RBC Capital Markets in New York. Whoever wins will need to “find consensus in practical and centrists policies.”

Chileans will return to the polls on Dec. 19 for the second round.

A poll conducted by Cadem between Nov. 19 and 21 and released Monday showed Kast and Boric tied at 39% in a runoff scenario.

“The overall message is that this shift to the left has been pushed back,” said Alvaro Vivanco, head of emerging-market strategy at Natwest Markets. “There is, for the first time in a while, the possibility that a more market-friendly -- not only at the presidential level -- policy environment will start to take hold.”

The country’s dollar debt due in 2053 climbed more than 1 cent to trade as high as 103.8 Monday. Chile’s 5-year sovereign CDS tightened 5.6 basis points to 84.3 basis points, the biggest drop since Aug. 27, according to data compiled by Bloomberg.

Several of the nearest candidates in Sunday’s vote are ideologically closer to Kast than Boric, potentially giving the 55-year-old conservative the upper hand in the scramble for endorsements.

Franco Parisi was the surprise of the election, placing third with 12.8%, just ahead of Sebastian Sichel of the center right, while Yasna Provoste of the center left received 11.6%.

Parisi, a celebrity economist living in Alabama who hasn’t campaigned in Chile, could play the role of kingmaker, although it’s not clear how his supporters will vote in the runoff.

Other uncertainties also remain. A constitutional assembly is currently rewriting the constitution that dates from the military dictatorship of Augusto Pinochet and enshrines the country’s free-market approach. At the same time, social tensions are simmering after a wave of protests paralyzed the nation in late 2019. The runoff between Boric and Kast may exacerbate those tensions.

“Chileans are to choose between two starkly different agendas,” JPMorgan Chase & Co. analyst Diego Pereira wrote in a report. Whoever wins, “frustrated expectations accumulated over previous years mean the demand for a greater safety net is a political reality, likely to be shaped by the new constitution, and public debt is heading higher.”

Kast, meanwhile, was pulling no punches.

“We’re going to recover peace, order, progress and our freedom,” Kast said. “On Dec. 19, Chile has to choose between freedom and communism.” 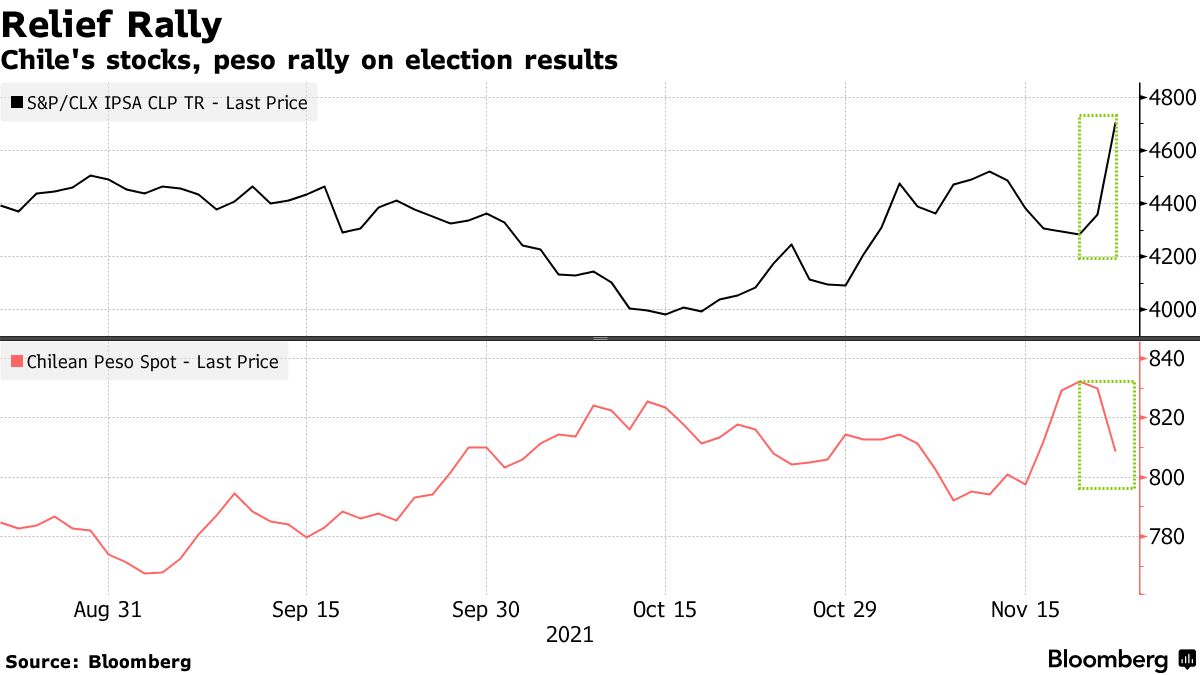 Stocks surged as much as 9.4% while peso strengthened