An official with direct knowledge of the matter confirmed the meeting between Erdogan and central bank Governor Sahap Kavcioglu without elaborating on what was discussed. The person spoke on condition of anonymity as the meeting wasn’t officially announced. The presidency declined to comment.

The central bank said in a statement that the moves in the currency market were “unrealistic and completely detached from economic fundamentals,” but warned it has no commitment to any exchange rate level.

The latest collapse in the currency came after Erdogan defended his demands for lower borrowing costs that have driven up prices and frustrated investors. They complain monetary policy is becoming increasingly irrational and unpredictable in a country where the president’s influence runs deep. While most central banks are talking of tightening policy as the global recovery fuels inflation, Turkey has slashed 4 percentage points off borrowing rates since September.

“For investors, Erdogan’s comments mean one thing: there will be no one there for them when inflation continues to take a toll on their assets,” said Ima Sammani, an FX market analyst at Monex Europe. “Erdogan’s comments can largely be seen as abandonment of caution and a sign to markets that the easing cycle is unlikely to end anytime soon.”

Erdogan weighed in late on Monday to defend the measures that met near-universal criticism from economists and even insiders, saying they were part of a longer-term shift that prioritizes exports and job creation.

With his popularity at an all-time low ahead of elections in 2023, Erdogan looms large over the central bank. He’s sacked governors who failed to heed his pressure, evoked religion to justify lower rates and poured scorn on the “vassal economists” who question his unorthodox mantra that high borrowing costs are the cause of inflation rather than a brake on price gains.

“It’s as if they put a child in charge of a nuclear power plant,” said Kerim Rota, head of economic policy at opposition Future Party, criticizing Erdogan’s economic policies. Speaking on opposition Halk TV, Rota, a former banker, said millions of Turks who earn liras will lose with this policy.

The lira’s slump has prompted institutions including and Goldman Sachs to predict rate hikes in the first half of 2022, though some say the threshold may not be reached that fast.

“It feels like he has put all his eggs in the rate cut basket, and someone has supplied him with the narrative” that a weaker currency is a good thing, Tim Ash, a strategist at BlueBay Asset Management in London, said by email. “But there is no floor for how low the lira can fall.”

Erdogan’s determination to drive down borrowing costs has pushed Turkey into new territory, with many analysts questioning whether the fallout will affect his grip on power. The currency’s rapid depreciation drives up the cost of goods for ordinary citizens, with his own working class base clobbered the hardest, and poses risks to the banking sector.

Opposition leader Kemal Kilicdaroglu, whose party won control of Istanbul and Ankara in local elections in 2019, on Tuesday called Erdogan “a fundamental national security issue for the Republic of Turkey.”

“You have turned the Turkish lira into a discredited currency,” he said. “You have put our economic independence up for sale.”

Turkish bonds fell the most among dollar-denominated sovereign debt from emerging markets today. The yield on Turkey’s April 2043 dollar bonds jumped to 7.18%, the highest since the end of March.

The bonds of Akbank TAS maturing in June 2031 also jumped to 7.99%, the highest since their sale in June. The dollar bond of budget airline Pegasus Hava Tasimaciligi due April 2026 is poised for its biggest fall on record.

The last time the lira witnessed a longer losing streak was in 2001, when the country was locked in a spiral of hyperinflation and soaring debt that ultimately propelled Erdogan’s AK Party into power.

To be sure, Turkish banks have built up large capital buffers, which should help insulate them from the effects of the weaker currency, wrote Jason Tuvey, a senior emerging markets economist at Capital Economics in London.

The collapsing lira has also lifted stock markets, the real-estate sector and boosted the country’s exports. 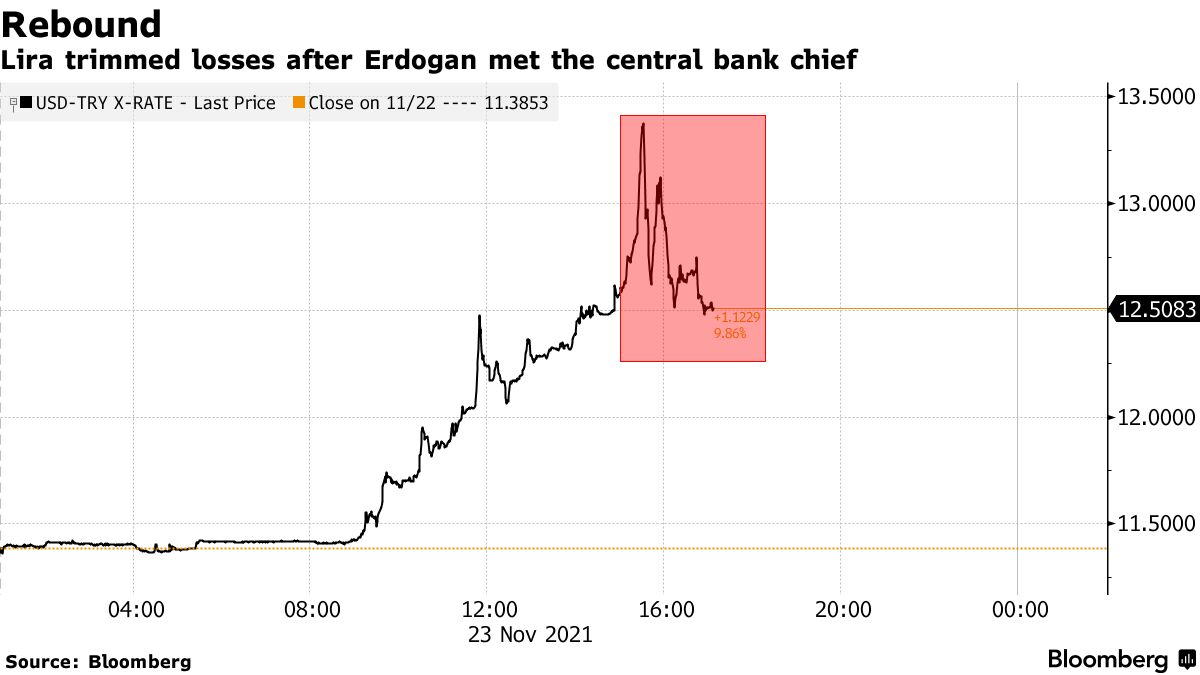