The dollar’s relentless advance to a two-year high is roiling Asian currencies and pushing policymakers into action to curb losses.

From direct dollar selling to verbal intervention, authorities are deploying every tool from their armories to ward off currency threats. India and Taiwan have intervened in the market, while Japan has tried to talk up the yen. China tweaked policy parameters to slow the slide in the yuan and Hong Kong is likely to step in as its currency brushes near the lower end of its trading band.

“Asian central banks are becoming more concerned about weaker currencies and higher inflation,” said Mansoor Mohi-uddin, chief economist at the Bank of Singapore Ltd. He cautioned that intervention is unlikely to work while the Federal Reserve remains hawkish on interest rates.

Here is a run-down of what Asian central banks have been saying and doing about their currencies.

The People’s Bank of China in its latest quarterly monetary report issued Monday vowed to keep the foreign-exchange market operating “normally,” saying it would guide market expectations. It also reiterated that it would maintain a “managed” floating exchange rate system for the yuan against a reference basket of currencies based on market supply and demand. The yuan dropped to 6.7411 per dollar on Tuesday, the weakest since November 2020.

“I would expect the PBOC to continue to guard against sharp moves as shown by some attempt to restrain the daily onshore fixings,” said Eugenia Victorino, head of Asia strategy at Skandinaviska Enskilda Banken AB in Singapore.

The Reserve Bank of India is in spot and forward markets to defend the rupee, which slid to a record low on Monday, according to a person familiar with the matter. India’s FX reserves of about $600 billion offers the RBI plenty of room to manage a gradual decline in the rupee, according to Radhika Rao, a senior economist at DBS Bank Ltd.

A drop in the yen to a two-decade low is causing headaches in Japan. The Bank of Japan is keeping the benchmark 10-year yield from rising above 0.25% to stoke sustainable inflation, and in doing so it’s adding to downward pressure on the yen.

Any decision by the Ministry of Finance to intervene to prop up the yen would contradict the BOJ’s accommodative stance.

Japan last bought yen against the dollar in 1998. Intervention remains unlikely until the currency pair reaches 145 per dollar, as long as the selloff is orderly, Bank of America strategists, including Shusuke Yamada, wrote in a research note last week. It traded around 130 on Tuesday.

Taiwan’s central bank said last week that it smoothed volatility in the currency market in April as it was hit by foreign selling of shares in technology companies. The Taiwan dollar has plunged about 7% so far this year.

In Hong Kong, the local dollar is only a whisker away from the weaker end of the monetary authority’s trading band at 7.85 per dollar. A break of that level would spur policymakers to buy the currency to ensure the peg to the greenback remains in place.

Indonesian stocks and bonds saw some of the in years on Monday, prompting Bank Indonesia to say it’s committed to be in the market to stabilize the rupiah if needed. 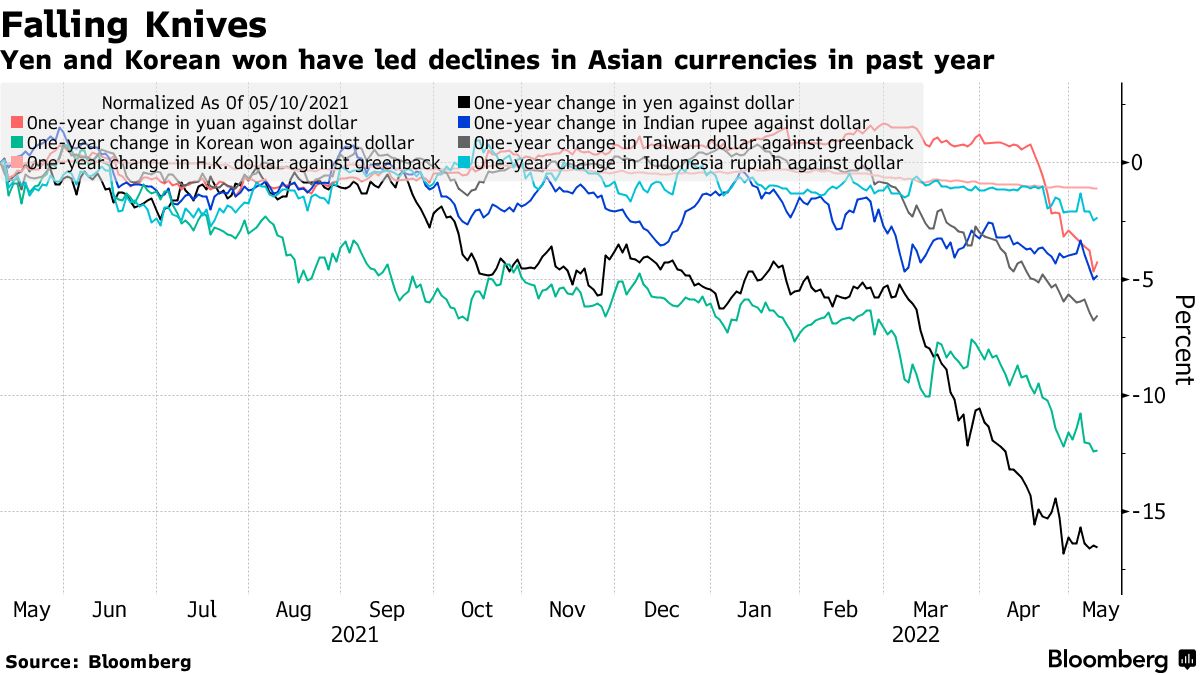 China has introduced some measures to slow yuan weakness

India, Taiwan have stepped in as South Korea monitors market