The Japanese yen fell to a fresh 24-year low against the dollar as one of the worst US bond selloffs in decades widened the gulf in interest rates between the US and Japan.

The currency breached the 135.19 mark for the first time since 1998 and traded around 135.25 in early Wednesday trading Tokyo. Treasury yields continued their rise overnight and traders have speculated that the yen could go on to test other key thresholds -- like the 140 level -- if officials don’t intervene to halt its decline.

The yen’s trajectory has been driven by the growing gulf between monetary policy in Japan and the US.

The Fed is widely expected to step up its campaign against inflation Wednesday by raising its key benchmark rate by three-quarters of a percentage point, the biggest single move since 1994. By contrast, the Bank of Japan, which is also meeting this week, has been to keep yields low.

“Speculation has been growing that the bank’s going to do something,” said Erik Nelson, a currency strategist for . If the BOJ widens its band for yields, or even drops a hint of doing so in the future, that could have major repercussions for the currency. “Any whiff of a pivot from the BOJ and dollar-yen is likely to reverse pretty sharply,” Nelson added.

BlueBay Asset Management is among hedge funds betting the central bank will be forced to abandon its yield-curve-control policy, with chief investment officer Mark Dowding calling it “.”

Implied yen volatility is at its highest level since the pandemic’s outbreak amid uncertainty about global growth and the Japanese central bank’s rigid yield-curve control policy.

Among central banks from developed countries, the BOJ is the only one that has resisted pulling support from its bond market through so-called quantitative tightening. Instead, it has kept local yields anchored to the floor in an attempt to boost the economy.

It meets this week to decide policy and is widely expected to keep its main settings on hold, despite the pressure on both the currency and the central bank’s cap on yields. Most economists expect the central bank to continue to stick with its position unless the yen breaches the 140 level against the dollar.

The steep bond selloff in the US since Friday has exacerbated the gap with Japan by driving up 2-year US Treasury yields by more than 60 basis points over the last three days to 3.43%. With comparable Japanese yields still below zero, the gap between the two is now at the widest since 2007, giving investors an incentive to shift cash to the US.

If the Fed hikes by 75 basis points on Wednesday as expected, that may only further strengthen the dollar, depending on what the BOJ chooses to do.

“If the BOJ comes out and says, ‘We’re going to continue to maintain this policy for the foreseeable future,’ maybe there’s a brief selloff in dollar-yen,” said Nelson. “But we’re going to 140 in the next 2-3 months, or 2-3 weeks, frankly. This thing’s just a rocket ship.” 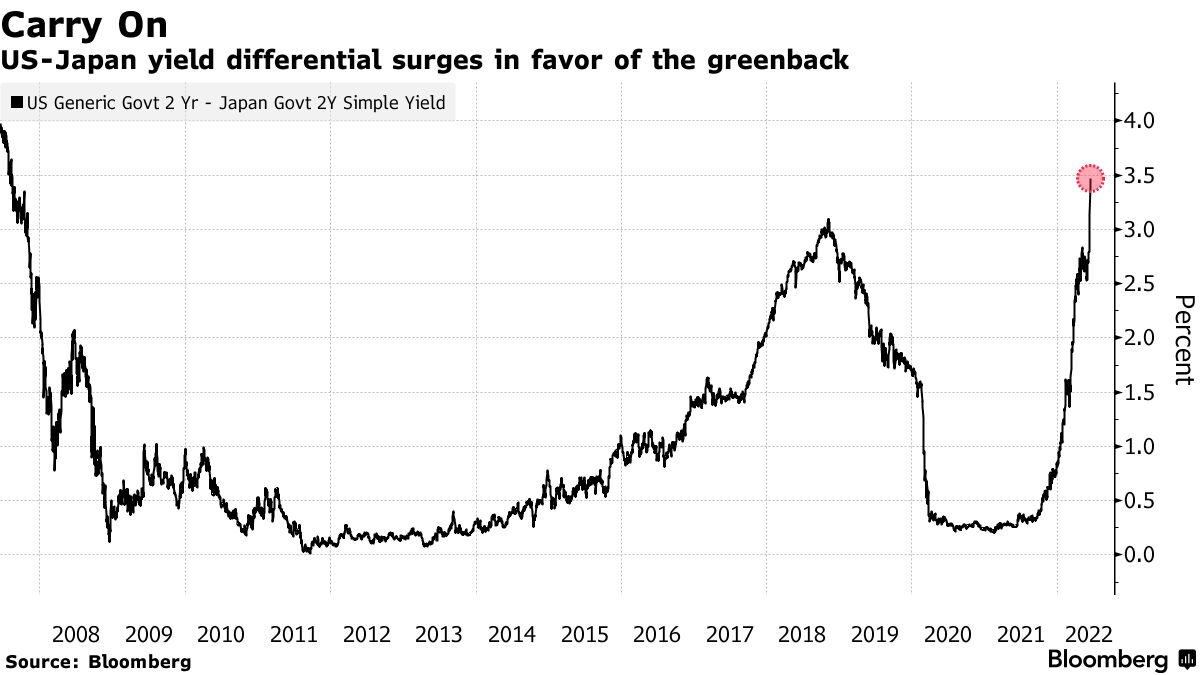 Widening yield gap between US and Japan supports the greenback