“Sometimes you have to take tough decisions.”

That was Swiss National Bank President Thomas Jordan’s comment in early 2016 as he looked back on the market mayhem that greeted his to scrap his nation’s currency cap.

Thursday’s unexpected 50 basis-point interest-rate hike wasn’t a shock on that scale, but it was a move drawn from the same playbook.

While central bankers from the Federal Reserve to the Bank of England generally try to handhold markets toward monetary shifts, whether on interest rates or bond buying, Jordan’s SNB favors a blunter approach. It in currency markets without notice, it changes policy outside of scheduled meetings and it has now embarked on a tightening cycle with barely any advance warning.

Goldman Sachs said the “hawkish surprise” may just be the start. It sees the rate rising to 1.5% this time next year, from -0.25% currently, starting with the September meeting.

Given the history, Capital Economics even says a second rate increase before September is possible. Whenever the next move comes, it will end Switzerland’s sub-zero era, which was introduced at the end of 2014 to deter investors from piling into safe Swiss assets and pushing up the currency.

For the 59-year-old Jordan, scrapping the currency cap has so far been the defining moment of a quarter of a century at the SNB, a decision unleashed on the world one Thursday morning in January 2015.

It wasn’t the Swiss central bank’s first curveball, either. Policy moves in 2011 and 2014 -- both out-of-calendar rate cuts -- also arrived out of the blue, though the former happened under Jordan’s predecessor, Philipp Hildebrand.

The occasional shocks stand in contrast to the SNB’s usually more discrete -- perhaps more Swiss-like -- style of operations. The three board members operate by consensus, never air disagreements in public and refuse to publish minutes of their deliberations.

According to Nadia Gharbi at Pictet, the speed at which inflation, currencies, and other central banks have moved means that “surprising the market was the only way to have an impact.”

“For the SNB it benefits to follow this pattern,” she said.

This time, close watchers of the SNB had a hint something might be up after Jordan warned of inflation pressures last month. His comments about “second-round effects” sent the franc higher against the euro, and this week’s meeting was seen as a close call by some.

But even then, economists in a Bloomberg survey didn’t forecast a rate increase.

“I thought there was no chance they would hike, so I was dead wrong,” said Brad Bechtel, global head of foreign exchange at Jefferies in New York. “I have never had much luck with the SNB.”

Jordan is unlikely to have any regrets.

He didn’t about the 2015 about-turn and on Thursday he indicated that investors should be prepared for more surprises in future, should the situation warrant them.

The SNB, he said, “is not in the business of forward guidance.” 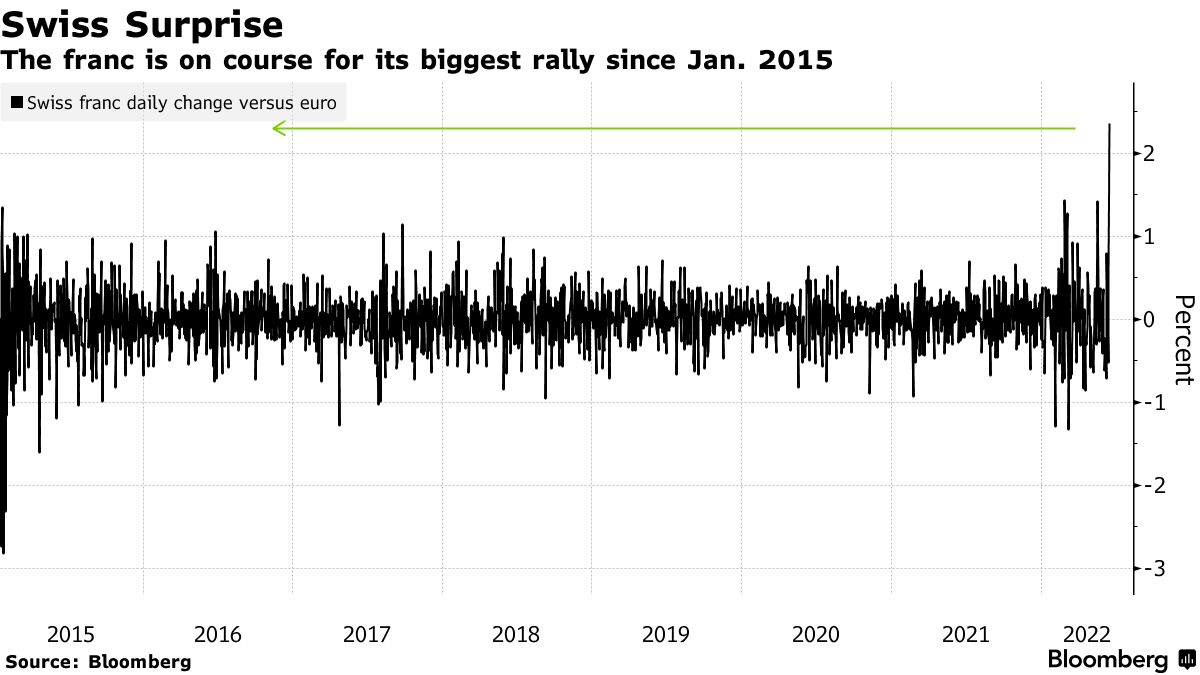 Swiss central bank has a long history of policy surprises